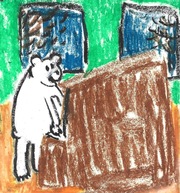 All-ages bear-saving vegan drug-free home-recordings from the forests of Sweden.

Back to the blog start page

Pictures of the last few weeks.